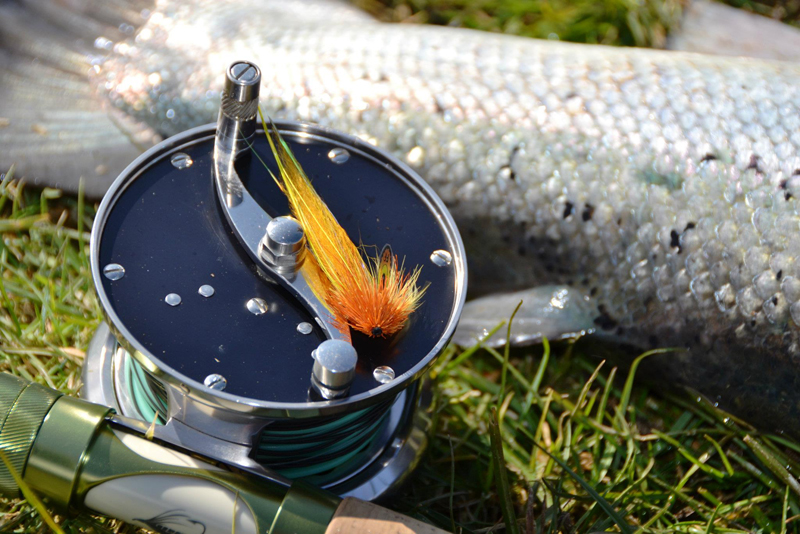 Land locked salmon from the shore - Magic Minnow Flax:
Last week Daniel Nilsson – one of our Swedish Kinetic / Fairpoint Outdoors sales representatives had combined a sales meeting with some fishing in the large Swedish lake, Vättern.

Costumers Carl Schander and Martin Danielsson from the shop “Böjda Spön” were going to test some of the Magic Minnow lures on the land locked salmon found in the large lake. The first day they were fishing from boat casting with Magic Minnow D360° in-line lures near the rocky shore. A couple of smaller salmon were caught and two others, including a really large one, were lost. All of this during just one and a half hour of fishing. 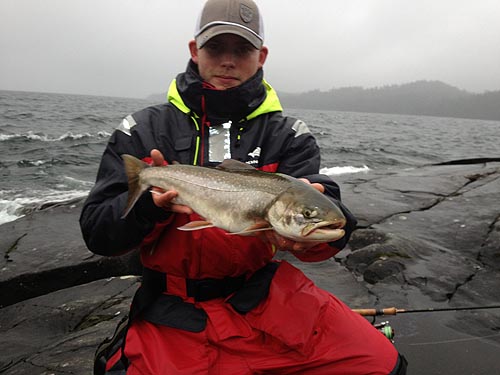 The second day big waves made boat fishing to risky and the guys went casting from the rocks. Daniel was using a D360° while Martin picked a 20g Magic Minnow Flax in “Burned Jewelry” color.

Martin was first to hook up, and as while he was leaning into a big fish, Daniel was able to both hook and land one of the lakes beautiful char. There was no doubt that Martins fish was something extraordinary,
and luckily Carl was ready to assist in landing the monster. As expected it was a beautiful salmon – all chrome with dark spots. 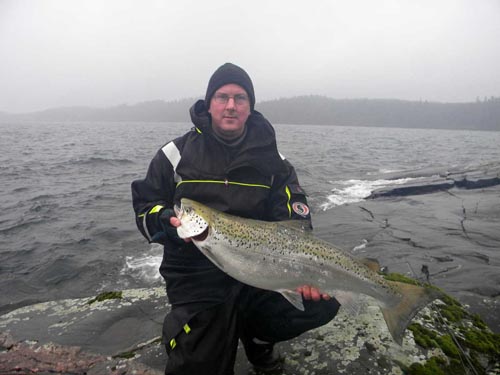 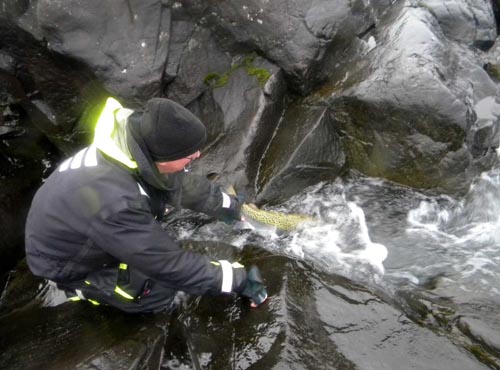 By carefully weighing the salmon and the landing net, the weight of the salmon could be calculated to 8.1 kilo – truly a remarkable catch!

The large salmon was gently released back into the lake after a few photos, and before the day was over another but smaller char a small salmon were also caught on the Magic Minnow lures. 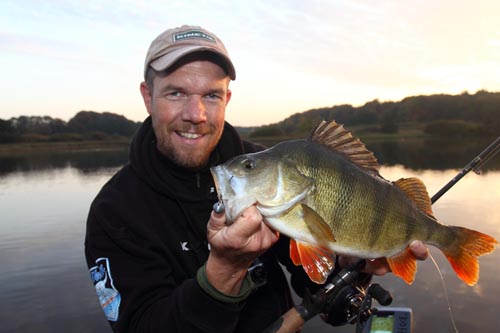 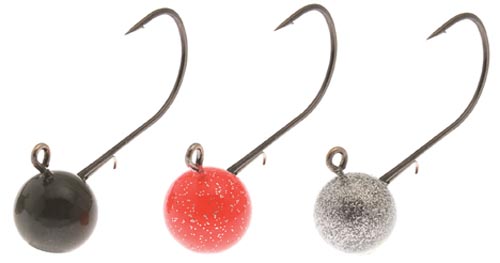 Several perch over one kilo were caught and the two biggest both balanced the scale at 1375 g. The length measures were 43 and 45 cm. 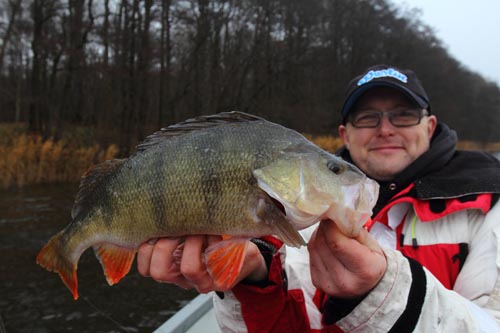 During the latest trip a Westin PaddleTeez in Confused Tomato color accounted for the 45 cm fish while vertical jigging. 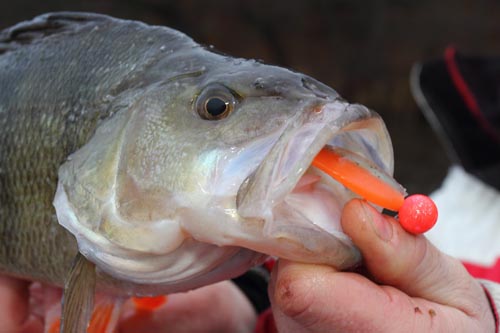 Also the new Westin TwinTeez proved to be deadly when shortened down and fished on a drop shot rig.

Huge pikes on Westin Lures
Joakim Eriksson and Christer Lindström are two Swedish pike specialists catching a lot of big pikes every year. Some of the latest catches on Westin lures by the two skilled pike anglers are a couple of fish
weighing in at almost the same weight. 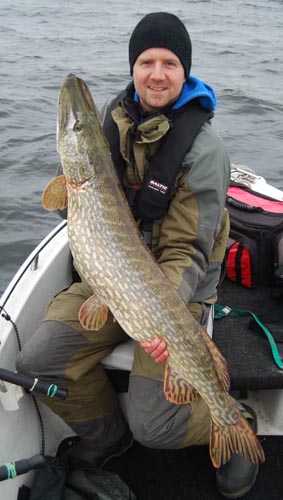 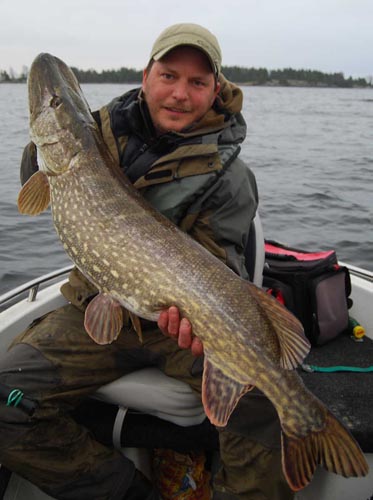 Both Joakims and Christers fish were caught while trolling at 1.5 knot. Christer was using a 19 cm Westin Jätte (Eelpout color) to catch his fish.

Young angler with big Westin lures and a huge pike
The 23 cm version of Westin Jätte is a perfect big-predator-lure for trolling and targeting huge pike. 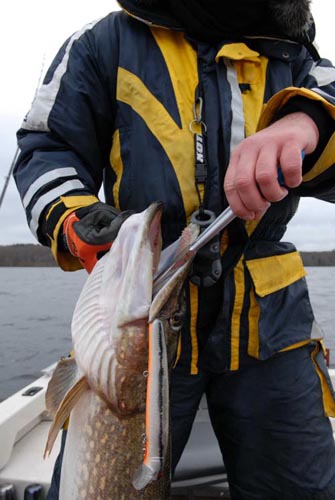 A home-painted Westin Jätte was part of the lure selection when Swedish Ola Nilsson, his friend Mattias Jönsson and the nephew of Mattias – 10 year old Gustav Nilsson – went trolling for huge pikes during the last part of November.

Since the water was cold, the tactic of the day was to use line mounted side planners to spread out the lures and to fish at a slow speed close to 1.0 knots. The first huge pike of the day was caught by Ola who landed a beautiful 10.1 kg fish. This fish was tricked by a large plastic lure. 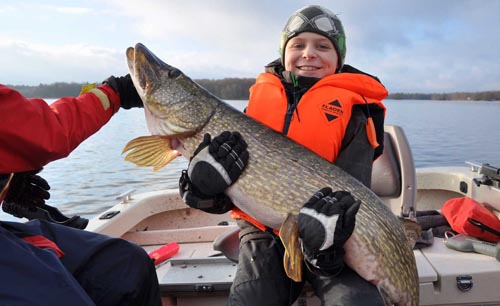 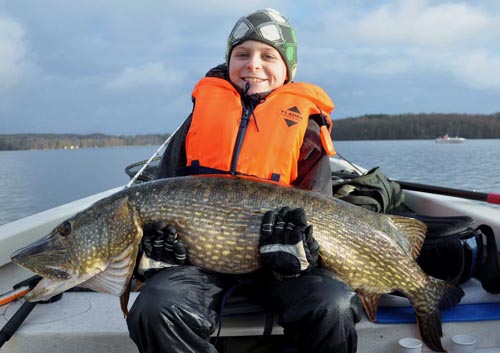 Only 30 minutes later it was time for the Westin lure fished on Gustav’s rod to prove its worth. A huge pike had attacked the lure and Gustav was in for the fight of his life!

It was hard but Gustav managed to wrestle the fish to the boat and soon after he was posing with a pike that seemed gigantic compared to his own size. The impressive measures were 11.54 kg and 117 cm. 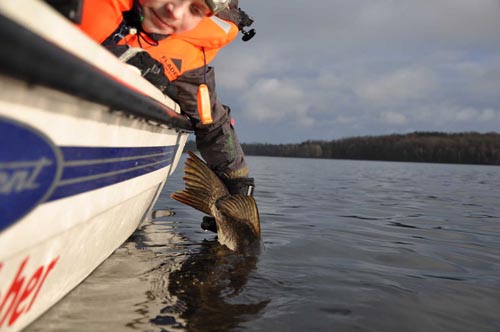 A big fish like this represents the top of the food chain and as a gesture Gustav released the fish unharmed back into the lake.

The homemade color used on the 23 cm Westin lure is called EKG by Ola Nilsson and his friends. The best resembling production color will be the Emo color – a new color for the 23 cm Westin Jätte in 2013.

Besides testing new tackle one of the main purposes, when Westin consultants Luc Coppens and Jörgens Larsson meet up for four days of fishing in Holland, was to test the Swedish methods in Dutch waters.

Due to a passing storm the first two days became more like one day of fishing in a larger river. The river is known for having short periods every year when large zanders are caught by traditional vertical jigging
close to bottom structures. 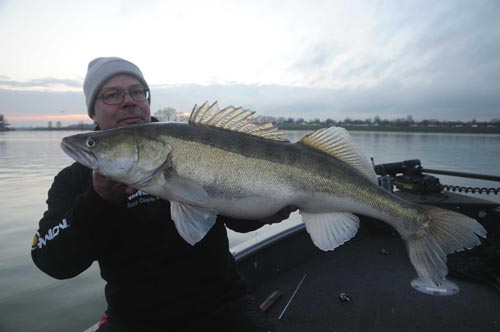 In total Luc and Jörgen caught around 30 zanders but the big ones didn’t cooperate and the sizes was from one kg to around three kg / 65 cm. The new 6” / 15.3 cm Westin TwinTeez mounted on 20 g Westin RoundUp jigheads worked really well in several different colors including Striped Lime, Striped Emergency, Slime, Baitfish and Old Gold.

For the remaining two days Luc and Jörgen were fishing a large lake, trying to find bigger zanders with pelagic hunting habits in mid water. They found the zanders hunting in the top part of the water column at 3 to 10 meters in areas that were 20-30 meters deep. Huge 8” / 20.4 cm Westin TwinTeez mounted on a 30 g Westin RoundUp jighead proved deadly. 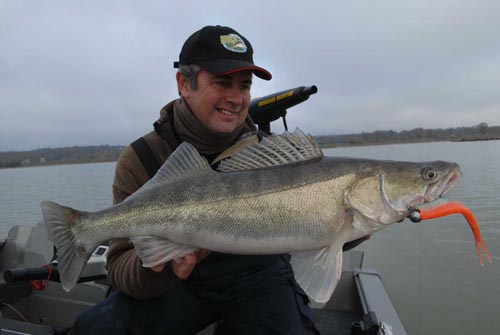 Several colors caught fish, but most of the takes were cautious until testing the Confused Tomato color and including one of the glass rattles found in the package. When using this combination the zanders got
turned on and the bites were really aggressive. In total Luc and Jörgen caught 13 zanders in mid water. 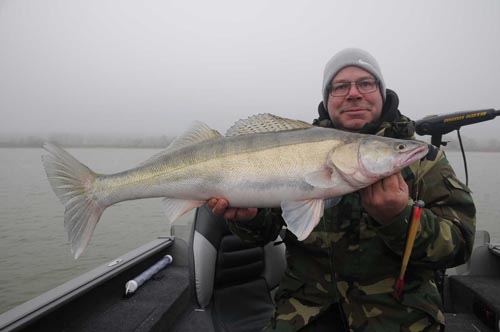 The size of them was impressive. Ten fish were above 74 cm and the biggest measured 89 cm and 7.02 kg.

Testing the method in Luc Coppens home waters was an eye opening experience. According to him the average size of the zanders made it some of the best quality-fishing he had experienced in these
waters during the last ten years! 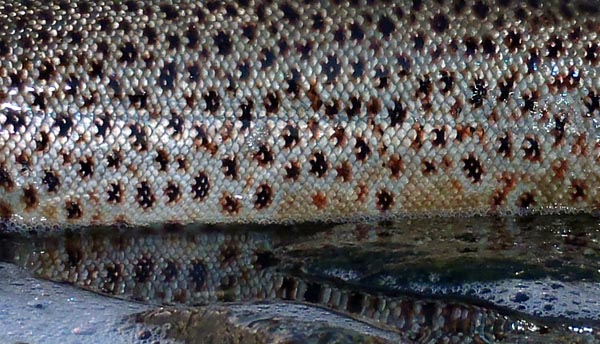 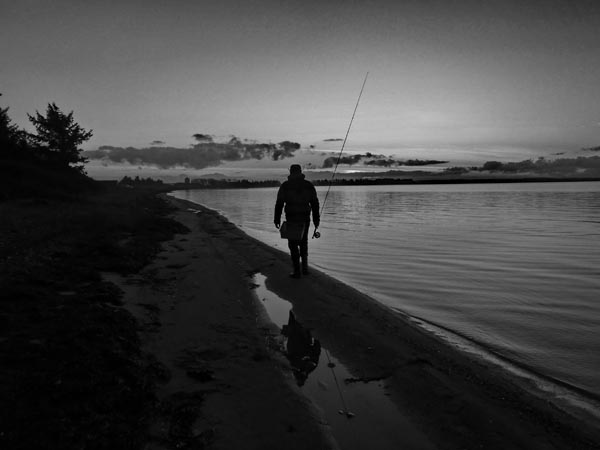 At the small Danish river Storaaen the season ends on October 15th. There’s a catch limit to the number of salmon every year and once the limit has been caught only sea trout fishing and catch and release on salmon is allowed.

Thursday last week Danish salmon and trout expert Thomas Mosgaard was at the river to do some trout and salmon fishing. At first the fishing was slow, but around noon Thomas decided to try out a Delfin Stikling lure.

Within 15 minutes he caught and released the first salmon measuring 64 cm and then a larger male measuring 87 cm. The 87 cm fish delivered a fantastic fight and Thomas was sprayed in mud, when he managed to land it.

Three weeks ago Thomas damaged his arm and after catching a smaller sea trout, he wasn’t able to do more spinfishing. Instead he baited up with worms on a barbless circle hook and used this method for the rest of the day. After moving to another part of the river he ended his session by catching a couple of impressive salmon measuring 97 and 100 cm and a small salmon he didn’t meassure.

All fishes this day were caught using a Kinetic rod, Viva reel and Rio Powerflex Braid . 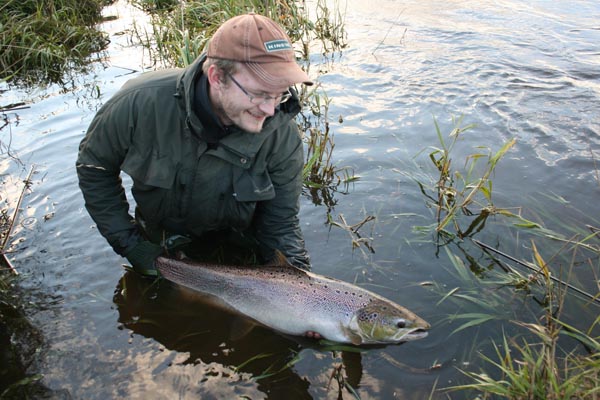 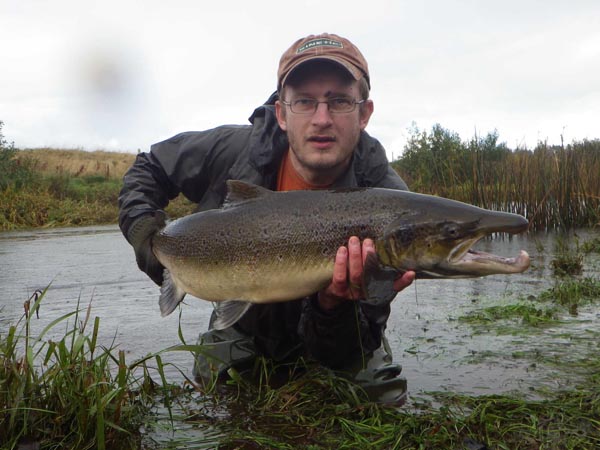 
Lots of big halibuts on Magic Minnow jigs and rigs

At Nordic Sea Anglings (NSA’s) camps in Norway this seasons bookings is now over, but actually the fishing seems to be as good as it gets. Last week NSA owner Jimmy Andersson was visiting Havøysund. Whenhe arrived at the camp the first evening he couldn’t stand the temptation of testing a sample of the new Magic Minnow Crazy Daizy jig at a spot five minutes boat ride away from the camp. His first choice was the new rainbow color and it didn’t take more than 20 seconds before this jig delivered the goods. It wasn’t the biggest halibut in his career, but still a great start.

Jimmy was testing four different colors of the Crazy Daisy jig and for the following days all of them were catching halibuts. The weeks fishing peaked on the last day as Jimmy was fishing with camp manager Ulf Hugsén. This day the two of them caught eight halibuts in total. The biggest measured 143 cm and was caught on a combination of the head from a blue glamour colored Crazy Daisy with a rainbow colored body.

According to Jimmy the new Crazy Daisy jigs are really hot: “They have proved to be real halibut killers and I’m expecting a lot of big halibuts to be caught on Crazy Daisy’s as they become available next year”.

At the NSA camp at Nappstraumen the halibut fishing is also peaking. Right now camp manager Fredrik Schmiterlöw is fishing with his father and a friend and the fishing is extremely good. When we talked to them yesterday they were fishing with deadbait on Magic Minnow Halibut Anti Twist Rigs. The fishing was absolutely crazy with halibuts measuring 115, 118, 124, 127, 150, 170 and 175 cm being caught and released.

The fishing took place only a few minutes boat ride from the camp and all three anglers had a new personal best halibut during the day. During the last week other big halibuts were caught by the three anglers and Fredrik had plenty of opportunity to test an Edge speed Jigging rod with a TiCA Talisman fixedspool reel that worked perfect for fish measuring 143, 150 and 170 cm.

In many ways sea anglers do not realize the full potential of the Norwegian sea fishing during the last part of the season. Despite what most sea anglers expect October is an excellent time of year for halibut fishing and hopefully bookings at this time of year will be more popular in the future, as people realize just how good the fishing can be. 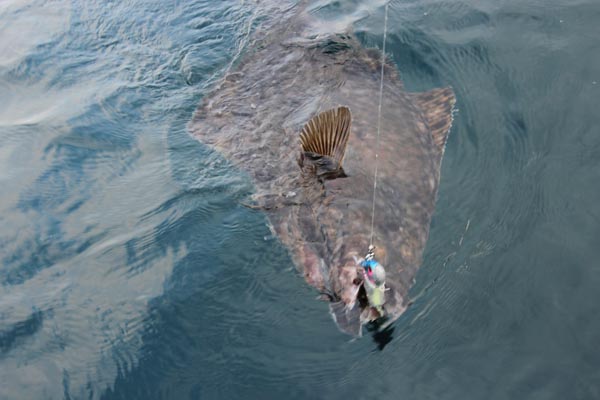 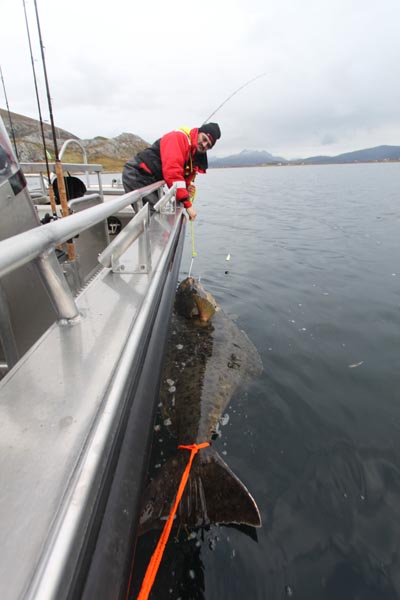 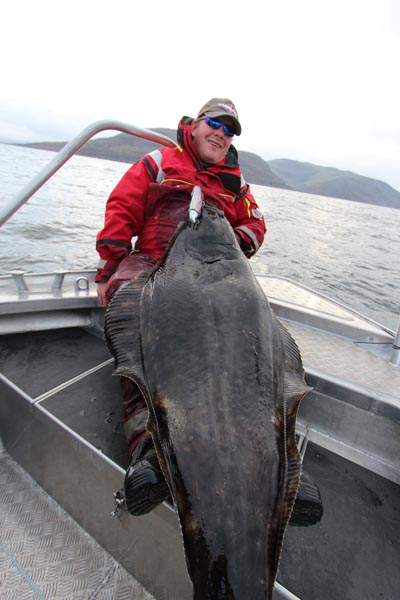