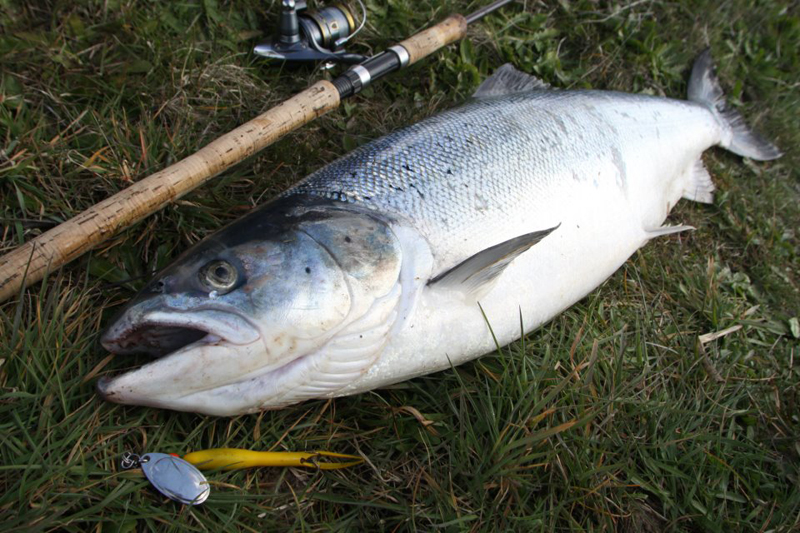 My apologies for sending two newsletters within two days, but there's a good news story to tell!

Please go to my Blog for all the latest news. (click the link)

However, when one considers the angling effort the achievement becomes much more apparent.

So the catch per rod day this year was just about 3 times what it was in 2002!

During the month we have also had Joint Best Fish of 2015:  - 14 pounders for Dan O'Keeffe & Cyril Killeen)& the Best day's Catch for One Rod   - six fish for Kieran Conlon yesterday - all released on fly.

We also had all of the top six best day's catches. The fly was the most productive method for the month (& indeed for the season to date).

There was a total of just 7 rod days for yesterday - giving an average of almost 2 fish per rod day.

Dave Walsh fished the upper river for a couple of hours in the morning & released a very fresh grilse on spinner on our very top beat 28 miles upriver.

Terry O'Keeffe landed 2 grilse on fly on the middle river from lunchtime on.

On the lower river, Cyril Killeen landed two on spinner - one released & one too deeply hooked to do so.

Chris Kendellen release 2 to 6lb. on fly for a couple of hours fishing in the morning.

Kieran Conlon had an amazing day releasing 6 fish on fly on a single-hand rod..

There was a very good run of grilse coming through Kilmurry in the morning & he was meeting fish almost every run down.

He caught 4 in the morning before it got very bright & then one in the late afternoon & the best fish of the day at about 8lb. at last light.

Prospects
Not withstanding low water, grilse have been running in good numbers & we have high tides peaked from Thursday to Sunday at 3.9m at Youghal.

AvailabilityThere is no problem for fishing & accommodation availability in the coming weeks at the moment. Now is also the time to think about booking your fishing break for the prime times in the coming season before it's too late.

With the €uro being so weak, exchange rates against the £ sterling, US $ Dollar & other currencies are very favourable, and make a trip to Ireland extremely good value for money at the moment!

Greetings from Ballyduff and Tight Salmon Lines for 2015