The First Angler to Catch Two Springers in a Day for 2012!

The First Angler to Catch Two Springers in a Day for 2012!

We have had just one day so far this season when two springers were landed - by two different anglers - which was February 5th.

Yesterday (April 3) was the first day this year where one angler has landed two fish in one day - and they were both on fly on two consecutive casts!

Kieran Conlon (Cork) managed to get away for only his second day fishing so far this season, & I sent him to Lower Kilmurry on a cold blustery day with a
NW wind & air temps from 7-10ºC.

Just before lunchtime he caught and released a lovely sea-liced fish on a Silver Grey tube fly right up at the head of the Island Stream in the
fast water - no surprise as water temp is now just above 52ºF.

This was his first springer of the 2012 season. 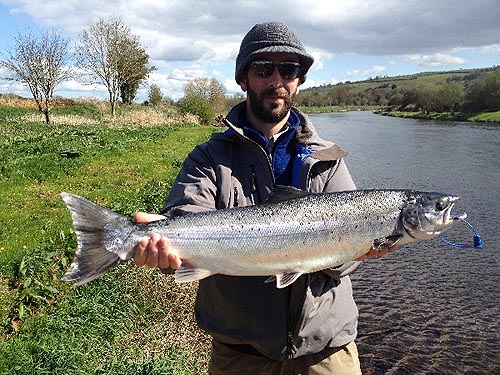 More surprising was the fact that he went back into the water & the very next cast caught a second fish from the very same spot.
Both fish were like peas in a pod.

The second fish (above) was weighed in later at the Lodge at 8.3lb. Kieran saw a number of other fish throughout the day. With the water at summer low level,
& very few fish having been caught or seen in the last week, it is very encouraging to have two sea-liced fish landed.

The river has been holding for several days at 0.24m on the gauge.

There is little rain forecast for the rest of the week & heading into the Easter weekend, so conditions will remain ideal for fly-fishing.

There have been very few rods out, especially in the second half of March, which is the main reason that there were only a couple of fish taken during that time.
Whilst the total for March was only 4 springers, It must be borne in mind that there were only 43 rod days on the entire fishery for the month.

It is hugely encouraging to know that sea-liced fish are running with the water at summer level as it is at present.
AvailabilityThere is no problem at the moment for availability for accommodation & fishing over the Easter weekend.

Fishing SyndicationWe initiated a very limited syndicate scheme in 2010. This was extended further in 2011 with membership for either the full season or just the first 4 months.
This scheme will continue for 2012, providing an enticing opportunity for those who are able to fish the Blackwater more often.
More details on this can be found on this link - Syndication

Book Early for 2012!:  Bookings are coming in much faster than last year, so it is advisable to book early to ensure your place - especially for the prime weeks.

Early Payment Discount:  Book and pay in full now & benefit from a 1% per month discount.

Currency Savings:  If you're in a country outside the Eurozone, now is a good time to book & pay as the € is at a 16 month low against other currencies at the moment,
particularly the £ Sterling & US$.