We have past 100 Fish for the Season on June 20.High Water promises Great Sport for the Coming Weeks. 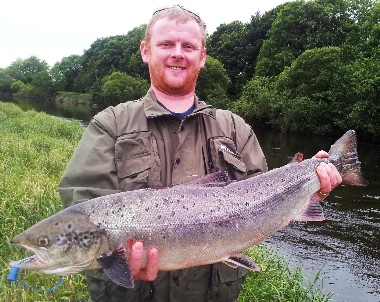 David Walsh with a 12.3lb. fish on spinner from Killavullen on the upper river on the 20th. 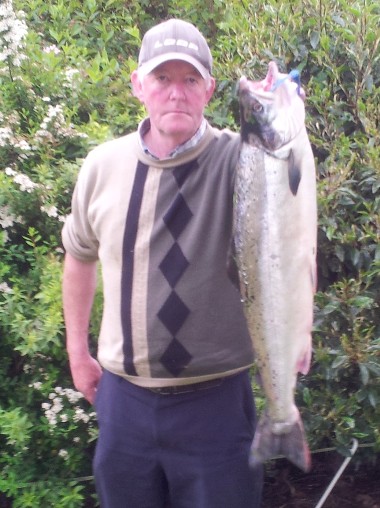 Dennis O'Donnell with a 12.1lb. fish on spinner from Ballyhooly on the upper river on the 17th..

There was heavy rain overnight in the middle to lower catchment. I had 19mm of rain on my gauge this morning.
There appeared to be a lot less in the upper catchment, but was a band of heavier rain moving across there late this morning (21st.).

The upper river was dropping but is now up a few cm.

June has been fishing exceptionally well, with generally high but comparatively clear water.


Prospects
With the high water we have had for the last couple of weeks, there have been excellent runs of fish coming in & sea-liced fish being caught right up to the upper reaches of the river.

There are some excellent quality fish running too, with a lot of those caught being around the 9lb. mark & our best this month is 13lb. I have heard reports of a number of fish caught up to 16lb.

Also very encouraging is the speed with which the clarity of the water improves after each flood, now that the river has had such a good flushing out & the water table is so high.

Prospects for sport in the coming weeks are superb!


Availability
There is no problem at the moment for availability for fishing and accommodation in the coming weeks.

September is starting to fill up, and availability of self-catering accommodation is already very limited.

We still have space available for the extension of the season to October 12.


Blackwater Salmon Fishing Blog
All of the very latest information on the river conditions, catches etc. Please bookmark this to easily access the up-to-date news.